In September 2012, Seattle passed an emergency measure lowering the height limit for single family residences on lots of less than 3,750 square feet from 30 feet to 22 feet.  The rhetoric around this measure focused on developers building tall houses in yards where the neighbors never expected a house to be at all. And despite the fact that some claimed the measure had too many loopholes, we had clients (a couple, not developers!) who were caught by it.

The measure was passed months into the design process of a new house in Madrona.  We heard about it as we were finishing up the permit drawings.  Particularly frustrating was the fact that there was no grace period- we had spoken to DPD and had our preliminary application for a 30 foot tall house approved months before, but because we had not yet submitted for permit, we were forced to quickly find a way to shave 8 feet off of the three story house that our clients were already happy with! 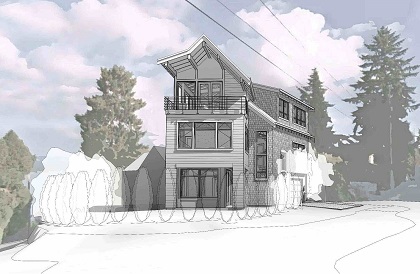 View of the originally designed 3-story house with the garage on level 1. 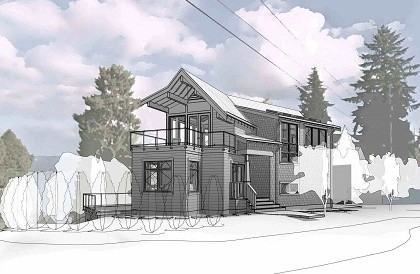 View of the updated 2-story design. Basement terraced garage with deck above is visible to the left of the house.

The original plans called for a small basement (basically taking advantage of the existing house’s cellar), but we were able to expand that beneath the entire house footprint, as well as out into the front yard as a terraced garage.  The clients will still have a view of Lake Washington from the great room on the top floor.  Unfortunately, they lose some of the view from their study, but moving the garage to the basement level makes the house seem much smaller and more similar to the neighborhood’s older houses, even if the size in square feet has not changed much.

We were disappointed when we found out that the measure would apply to this house, particularly because our clients were not developers, building a house where one had never been, but homeowners looking to get more space by demolishing their current house (which was under built for the neighborhood).  After completing the redesign, though, we are just as happy with it as we were with the original design.